China to carry out infrastructure upgrades and supply new trains to Argentina. 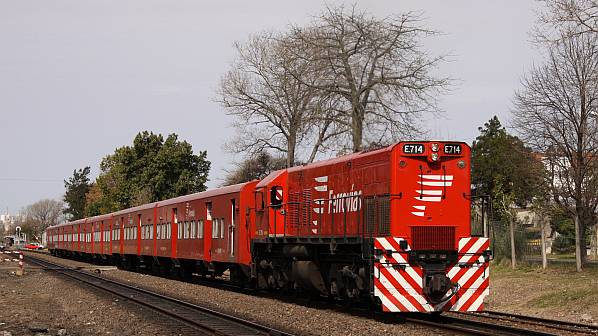 Two agreements with CRIG cover the renovation of the 1676mm-gauge Sarmiento Line from Once station in Buenos Aires and track renewal of the third-rail-electrified line between Once and Moreno, plus refurbishment of the Luján - Mercedes and Merlo - Lobos non-electrified lines. Installation of new fibre optic cable signalling between Once and Moreno and construction of a new control centre for the line at Haedo are also part of the plans, as is the connection of the Sarmiento Line to the Subte metro network.

The second CRIG MoU covers the modernisation and electrification of the Belgrano North suburban metre-gauge line from Retiro Belgrano station in Buenos Aires to Villa Rosa and its extension 15km further west to Pilar by conversion of an existing freight-only railway for operation by commuter trains. This is currently one of the few suburban services not operated by state-owned Argentinian Trains. Timescales for electrification have not been published. Ferrovías currently operates the concession on this line, but this is not being renewed.

The CRRC Sifang agreement is for the modernisation of the standard-gauge third-rail electrified General Urquiza Railway from Federico Lacroze station in Buenos Aires to General Lemos and includes the replacement of the existing EMU fleet which dates from the 1970s.

CRRC will also potentially supply new diesel trains, with 111 new coaches for the unelectrified metre-gauge Belgrano South line, plus 45 coaches for the non-electrified parts of the Sarmiento network, as well as new LRVs for the standalone Tren de la Costa route.

For data on projects in South America, subscribe to IRJ Pro.