ARGENTINA's world-famous Tren de las Nubes (Train of the Clouds) has ceased operating and concessionaire Ecotren has been stripped of its contract following a derailment in a remote area of the Andes. 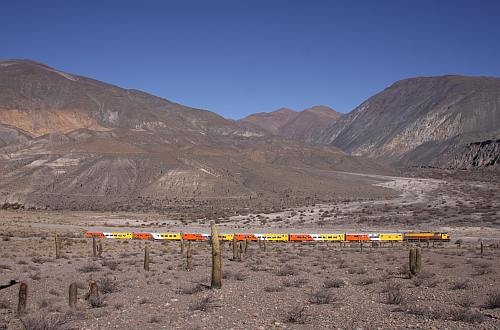 The tourist train was operated by Ecotren on behalf of the Salta provincial government and ran twice-weekly during the tourist season from the city of Salta into the Andes Mountains.

However on July 19 a derailment occurred in a tunnel on one of the most isolated sections of the route to the La Polvorilla viaduct 4221m above sea level. There were no injurues, but passengers had to walk 6km back along the line to the town of San Antonio de los Cobres, itself 3775m above sea level, as there is no road access to the site. Both the Argentine army and national gendarmerie assisted the passengers, many of whom had difficulty walking such distance at high altitude.

Ecotren had been operating the route since 2008 using refurbished coaches, with the 435km round trip taking around 15 hours.

The metre gauge route from Salta over the Andes into Chile was surveyed and built between 1921 and 1948. There has been no cross border freight on the route to Antofagasta, Chile, for several years, and while proposals for reinstatement have been made very little freight operates on the line within Argentina.

The Salta provincial government, which revoked Ecotren's concession, has stated it intends to restart operation of the tourist service by October.