THE first LRV to be assembled on Alstom's new €15m Citadis LRV production line at Taubaté in the Brazilian state of São Paulo was officially unveiled on October 21 and is now undergoing tests on the newly-commissioned test track at the facility. 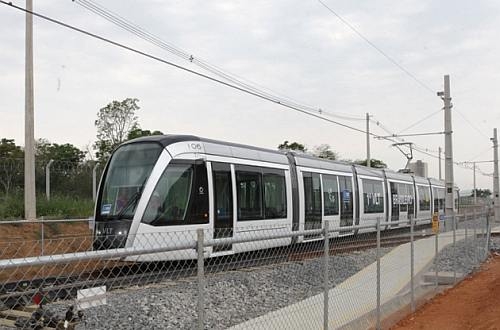 The production line occupies 16,000m2 and will be able to produce up to eight LRVs per month. The plant will serve the Latin American market where a number of light rail projects are emerging.

Taubaté is initially assembling a batch of 27 44m-long low-floor LRVs for the Porto Maravilha light rail project in Rio de Janeiro as part of an order for 32 LRVs placed in September 2013 by the VLT Carioca consortium, which is building the 28km network.

The first five units were built in France and two have been delivered with the remaining three due to arrive in Brazil next week. The first Brazilian-built vehicle is now undergoing dynamic tests, and is due to be delivered to Rio de Janeiro in December, while a further six LRVs are on the assembly line at Taubaté.

Alstom will validate the performance of various onboard systems on the 400m test track, including traction, brakes, supercapacitor energy storage, and air conditioning. Each vehicle will cover around 10km over four days of testing, operating at speeds of up to 40km/h.