THE city of Pilar, in the Argentinean province of Buenos Aires, inaugurated its newly renovated Villa Rosa station following improvements worth Pesos 157m ($US 2.12m) at a ceremony on August 24. 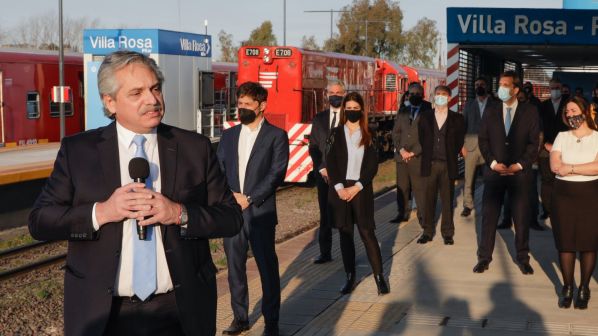 The station, which is the terminus of the Belgrano Norte commuter line to Retiro station in Buenos Aires, has been upgraded with higher platforms, new audio and video systems and LED platform lighting.

In addition, accessibility has been improved in shelters, ticket offices and accessways, and new toilets have been installed, while pedestrian and level crossings have also been upgraded. It is hoped that the refurbishment will provide a significant improvement in comfort for the line’s 7000 regular users.

Work on the station began in March 2018, but was halted in 2019 due to a lack of funding, subsequently resuming in May this year.

In addition, an agreement was signed at the ceremony by Mr Mario Meoni, minister of transport, and Mr Federico Achaval, mayor of Pilar, for further upgrades to the line worth Pesos 997m, which are expected to generate 740 jobs.

This programme of investment will include an extension from Villa Rosa to Pilar Industrial Park, refurbishments to Del Viso, Alberti, Manzanares, Pilar, Villa Astolfi and Derqui stations and a new underpass on Bergantin Indepencia Street beneath the Belgrano Norte line.

This follows the completion of a signalling project on Buenos Aires’s 5km San Martín Line viaduct on August 13.

The work was carried out by Alstom through a €5m contract granted by Buenos Aires infrastructure manager Autopistas Urbanas (AUSA).

The contract covered the design and development, installation, testing and commissioning of the signalling system. In addition, Alstom will provide technical support for the system for a further 15 months following the launch of the new system.

The installation, which began in 2019, was completed on March 20, with commissioning and testing subsequently being carried out during the coronavirus lockdown following the implementation of precautionary measures.

The three-track viaduct opened in July 2019 following two years of construction, and replaces an at-grade alignment between Palermo and La Paternal stations. It allows the removal of 11 level crossings in the city to reduce congestion on the city’s roads.

The viaduct is part of a $US 14bn investment programme to improve the city’s commuter rail infrastructure which also includes electrification of 70km of line on the San Martin line, which is intended to increase train frequency and improve journey times on the route.

The San Martin line is expected to serve 305,000 passengers per day by 2022, when the project is completed.