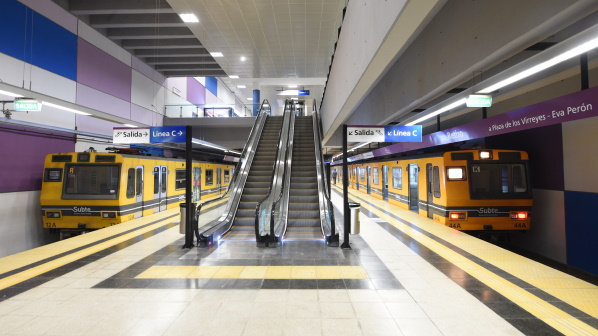 Award of the contract was planned for October 2018 with operation starting in January 2019. Paris Transport Authority (RATP) working with Alstom announced it had dropped its bid in mid-December 2019 while Keolis bidding with Transport for London (TfL) and Argentinian civil engineering company Helport, part of local conglomerate Eurnekian Group, dropped out in February 2020. Both consortiums cited the difficult economic conditions in Argentina as their rationale for withdrawing.

The final offer submitted in early 2020 by Metrovías, the sole remaining bidder, which is owned by Argentinean company Roggio Group working with German Rail (DB) and Siemens as advisers, was evaluated against the original criteria set by the Buenos Aires regional government before the contract was awarded.

Under the new contract Metrovías is paid per metro car-km operated, incentivising not only the operation of the full timetable but also the provision of full-length trains. To achieve higher fleet and system reliability predictive maintenance based on routine digital condition monitoring of trains and assets such as escalators will be introduced. Significant investment in the existing maintenance depots is planned to enhance capacity and effectiveness. A wide range of customer facing innovations are also promised, including improved passenger information, ticket machines, new ticket barriers and passenger smart phone apps.

The six-line 56.7km Subte network is operated using a mix of new Alstom and CRRC trains, plus older second-hand trains bought from Madrid and Tokyo.