THE City of Buenos Aires confirmed on January 26 that it is planning to order 60 additional 300 series Metropolis cars from Alstom as part of the ongoing modernisation of its metro train fleet. 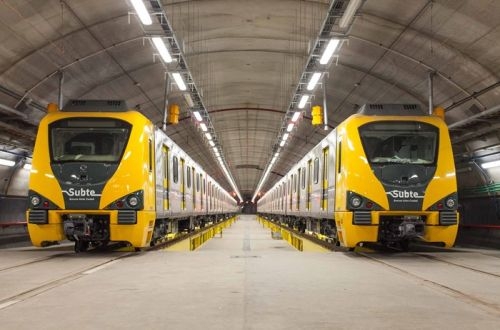 The stainless-steel air-conditioned cars will be used on the Line D, supplementing the fleet of Alstom 100 series trains delivered in 2001-2009.

The new trains will support the city's ambition to operate two-minute interval peak services on the 11km line from Catedtral to Congreso de Tucumán, which is currently used by around 340,000 passengers per day.

Argentina's Banco De Servicios Y Transacciones and Banco Puente will provide the city with loans totalling €60m, which will cover around half the cost of the order.

Alstom's plant in Lapa, Brazil, is currently supplying 120 300 series cars fro Line H, the first of which was delivered to the Argentinean capital last August.