THE Chilean embassy in Argentina and the government of the Argentinean province of Salta hosted a symposium for senior diplomats, politicians, and industrialists in Salta on May 29 with the aim of kickstarting the revival of the Northern Transandine railway. 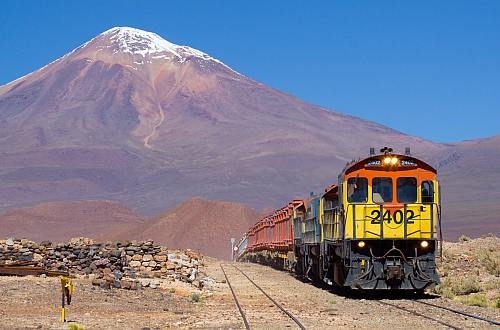 The line between Salta and Antofagasta in Chile was completed in 1948 and with a summit at 4474m above sea level it was the highest international railway in the world. However traffic never reached expectations and since 2006 the only regular services have been domestic freight traffic on the Chilean section and the weekly Tren a las Nubes tourist train on the Argentinean side.

The line passes through terrain rich in mineral resources, such as lead, copper and lithium, which remain largely untapped, in part due to a lack of adequate transport links. A restored Northern Transandine would do much to fill this void, by carrying the products of existing and potential mines down to the Pacific coast ports of Antofagasta and Mejillones, for export to Asia.

The Chilean section of the line is privately owned by Antofagasta Railway (FCAB) and Ferronor, while the Argentine stretch is in the hands of state-owned Belgrano Cargas.

A bilateral agreement was signed on the reactivation of the route in October 2012, but the project has made little further progress.