THE governor of the Brazillian state of São Paulo Mr Geraldo Ackmin officially launched construction on São Paulo metro Line 6 at a ceremony in the north of the city on April 13. 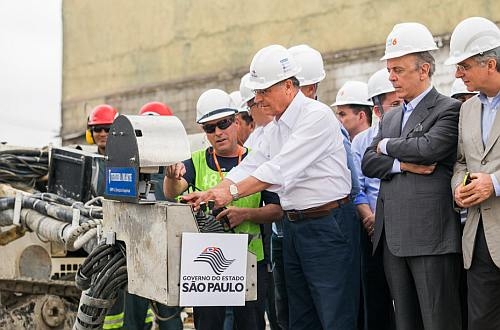 The 13.5km north-south line will link Brasilândia with São Joaquim and will have 15 stations including interchanges with metro lines 1 and 4, and CPTM commuter rail lines 7 and 8. The project includes the construction of a tunnel beneath the Tietê River at a depth of more than 60m.

Running underground for its entire length, the driverless line will serve university campuses and the district of Higienopolis. Commercial services are due to start by 2020 and the line is expected to carry around 633,000 passengers per day.

The PPP project is being implemented by Move São Paulo under a Reais 9.6bn ($US 4.17bn) 25-year build-operate concession awarded by the São Paulo state government in November 2013. The consortium, which comprises Odebrecht, Queiroz Galvão, UTC Participações and investment fund Eco Reality, was the only bidder to submit an offer for the contract.

Line 6 is the second PPP metro project in São Paulo after Line 4, which opened in 2010.