AFTER several false starts, Argentina's Ministry of Transport confirmed on July 4 that work on a project to replace the surface alignment of the Sarmiento Line in Buenos Aires with a 22.4km tunnel will resume in September. 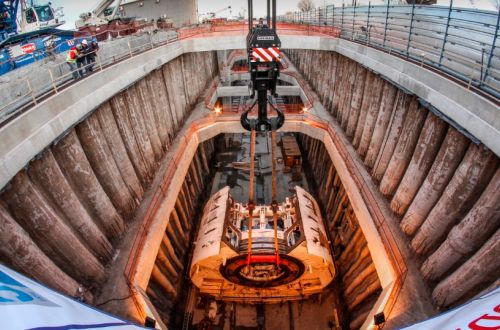 The project involves constructing two single bore tunnels, each 10.46m in diameter and running up to 22m below the existing alignment between Caballito and Castelar. The first phase of the project involves tunnelling between Caballito and Haedo, with Phase 2 extending the tunnel to Castelar. In the longer-term, the tunnel will be extended a further 14km from Castelar to Merlo and Moreno. Phases 1 and 2 include the construction of 11 underground stations and will enable minimum headways to be reduced from 10 minutes to three minutes.

The completion of the underground line will also eliminate 38 level crossings. At present crossing barriers are lowered for up to 29 minutes an hour on some sections of the line.

The project to bury the Sarmiento Line has had a long and turbulent history. In February 2006, Aregentina's then president Mr Nestor Kichner announced the launch of an international tender for the Caballito - Liniers section. The scope of the tender was subsequently widened to encompass the remainder of the tunnel to Moreno.

In January 2008 newly-elected president Mrs Christina Kirchner pledged the project would be completed by 2011. However, plans to finance the project privately ran into difficulty later in the year due to the global economic crisis and the government subsequently decided to finance construction through public sources.

In December 2008 a consortium of Comsa, Iecsa, Ghella, and Odebrecht was awarded a contract to construct the Caballito - Ciudadela section, which was due to be completed within three years.

The first TBM was lowered into an access shaft at Haedo in 2012, when the then transport minister Mr Florencio Randazzo pledged the tunnel would open in 2015. However, with the government experiencing further difficulty in obtaining international financing, the machine has remained idle for the last four years.

The government now expects the Caballito - Castelar section of the tunnel to open in 2020.