CUBA completed construction of its first new railway for more than two decades on July 1 with the opening of the 65km link between Havana and the port of Mariel, which provides access to a new container terminal. 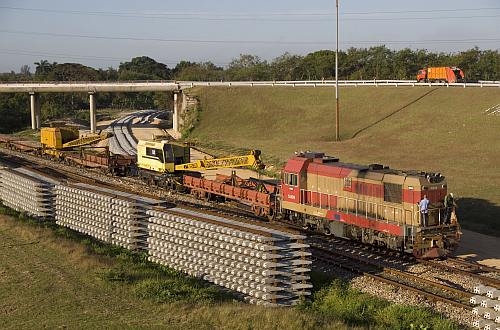 The line uses parts of an abandoned railway between Havana and Guanajay and a new alignment between Guanajay and Mariel. The railway is double-track throughout and includes a link from Guanajay to Artemisa, where it joins the Havana – Pinar de Rio main line.

At Havana the line joins the existing network at Almendares station. The new container terminal at Mariel will replace existing facilities in Havana, which will release land in the capital for redevelopment.

The port of Mariel has recently been developed in a joint venture with Odebrecht, Brazil, and in addition to the construction of new intermodal facilities this includes the establishment of a free trade zone.

The new line will be officially inaugurated on July 26, which is a national holiday in Cuba, although trains have already begun running. A passenger service operates over the line, primarily to carry dock workers from Havana to Mariel, although the new line will also help to improve passenger services in Artemisa province. It is expected that the new Russian DMUs currently being delivered to Cuba will be used for these services.

Cuban Railways hope to increase container movements by rail significantly as the port of Havana suffers from insufficient capacity at present and this situation should improve with the new terminal, which will have capacity to handle 1 million TEUs per year, compared with just 350,000 TEUs at Havana.