A major revamp of suburban rail services in Santiago was officially completed on March 17, when Chilean president Mrs Michelle Bachalet and minister of transport and communications Mrs Paola Tapia made an inaugural trip on Chilean State Railways’ (EFE) new Metrotren Nos service between Alameda and Nos. 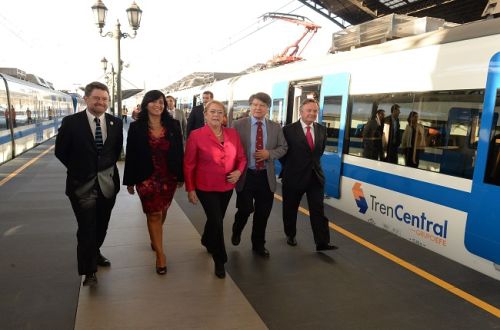 Initially EFE is operating only the daytime off-peak timetable, which comprises a 20-minute interval service between 10.00 and 17.00 with a 30-minute journey time for the 23km trip.

From March 31 operating hours will be extended until 23.00, with trains running every eight minutes during the evening peak and 10-minutes off-peak, with journey times cut to 24 minutes.

The full timetable will begin operating on April 12 with trains running every six minutes in the peak and 10 minutes off-peak.

Eight of the 10 stations served by MetroTren Nos have been upgraded as part of the project and vehicular and pedestrian level crossings have been replaced with bridges and underpasses to accommodate higher frequencies without disrupting road traffic.

Services are operated by a fleet of 12 two-car Alstom X’Trapolis Modular EMUs. Each 46m-long train accommodates up to 518 passengers, 96 of them seated.