THE first of 18 three-car Metropolis trains for Guadalajara metro Line 3 has left Alstom’s Santa Perpetua de Mogoda plant near Barcelona for the nearby port of Tarragona on the first stage of its journey to Mexico. 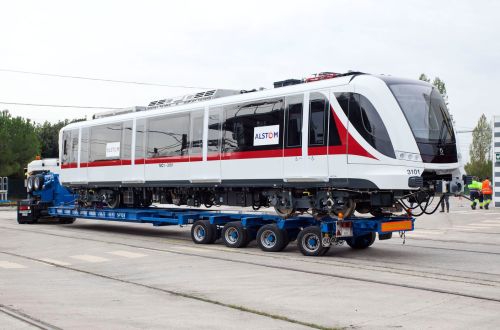 Mexico’s Federal Secretariat of Communications and Transport (SCT) awarded Alstom and CPVM, a subsidiary of Spain’s OHL, a €380m contract in November 2014 to supply railway systems for the 21.5km line from Periférico Zapopan to Central Camionera. Alstom’s share of the contract is worth around €240m and includes the fleet of 1.5kV dc articulated metro trains as well as electrification, signalling, and telecommunications.

The remaining 17 trains will be delivered in the next few months and dynamic testing is expected to begin on Line 3 in March 2017.