THE FIRST of 22 LRVs being built by Tremvia Santos, a consortium of TTrans and Vossloh, for the first light rail line in the Brazilian city of Santos began its sea voyage from Spain to Brazil on April 8. 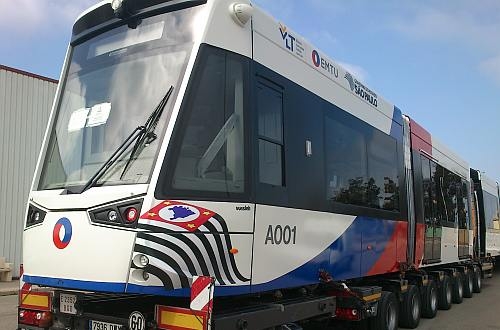 The 43.7m-long seven-section low-floor vehicle, which was built at the Vossloh Rail Vehicles plant at Albuixech near Valencia is due to arrive at the port of Santos on May 22.

EMTU, which is managing the project to build the line from São Vicente to Santos, says test operation will begin in June. Trials will continue until the first quarter of next year, when commercial operation is due to start.

The first three LRVs are being built in Spain, while the remaining 19 units will be assembled in Brazil, with the final vehicle scheduled for delivery to Santos in May 2015.

The initial 11km section of the line will run from Porto to São Vicente Barreiros Terminal, while the second phase comprises a 4km branch from Conselheiro Nébias to Valongo. The line is expected to carry around 70,000 passengers per day.