THE FIRST of 22 Alstom Metropolis trains for the Los Teques metro has left the French port of Le Havre on its three-week sea voyage to Venezuela. 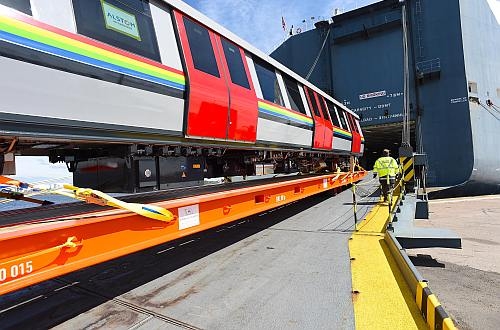 The six-car trains are being assembled at Alstom's Valenciennes plant in northeast France and are expected to enter service in the second half of this year on Line 1 and Line 2, which is due to open in July.

Line 2 is being built by Consorcio Linea 2, a consortium Odebrecht, Brazil, and Venezuelan construction company Vinccler under a contract awarded by Los Teques Metro Company (CAMT) in October 2011.

Consorcio Linea 2 subsequently awarded a €530m turnkey contract to a French consortium of Alstom (61%), Colas Rail (22%) and Thales (17%) to equip the 12km six-station line. Alstom's share of the contract is worth €325m and includes rolling stock, medium-voltage electrification, substations, and part of the signalling system.

The first phase of the Los Teques metro was inaugurated in November 2006 and Line 1 currently carries around 42,000 passengers per day. A third 18.5km line is planned to complete the network.