THE head of the government of the City of Buenos Aires Mr Horacio Rodriguez Larreta and Argentina's minister of urban development Mr Franco Moccia confirmed at the unveiling of the city's 2016 metro masterplan on April 28 that the metro operator Sbase has signed a contract worth around €60m with Alstom for 60 additional 300 series Metropolis metro cars for Line D. 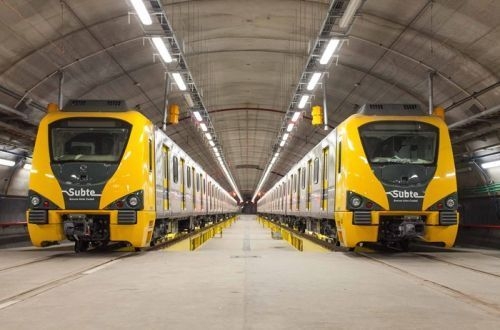 The stainless-steel air-conditioned cars will supplement Line D's fleet of Alstom 100 series trains, which were delivered in 2001-2009. The vehicles will operate as six-car sets and deliveries are due to begin next year, with assembly taking place at Alstom's plant in Lapa, Brazil.

The new trains will support the city's ambition to operate two-minute interval peak services on the 11km line from Catedtral to Congreso de Tucumán, which is currently used by around 360,000 passengers per day.

Sbase plans to begin operating three-minute peak services on Line D, together with lines B and C during the first half of this year following the delivery of additional rolling stock and completion of resignalling work. In the longer-term, the city plans to extend minimum three-minute peak frequencies to the entire metro network.

The additional Alstom trains are part of a broader rolling stock modernisation programme, which is adding around 400 air-conditioned coaches to the fleet. By the end of this year around 60% of trains will be air-conditioned.

All stations already have free passenger Wi-Fi and according to the masterplan wireless internet connectivity will be extended to the tunnels in a phased programme. Contactless fare collection has been introduced on lines B, D, and E, and is currently being rolled out on Line A.

The network is also set for expansion with the addition of several extensions and new stations. On Line H a new station at Santa Fe will open next month and extensions are planned north to Facultad de Derecho and south to Sáenz. Line E will be extended north to Correo Central, Catalinas, and Retiro and a new Line F is planned which will link Plaza Italia with Constitución, serving the districts of Palermo, Recoleta, Constitución, and Barracas.

Security is also being enhanced, and by the end of this year the CCTV network will reach 1500 cameras, which will be monitored from a centralised control centre.