THE Argentine government has announced a $US 327m order for 300 new 25kV ac emu cars from CSR, China, to replace the existing emu fleet on the General Roca 1676mm-gauge commuter lines south of Buenos Aires. 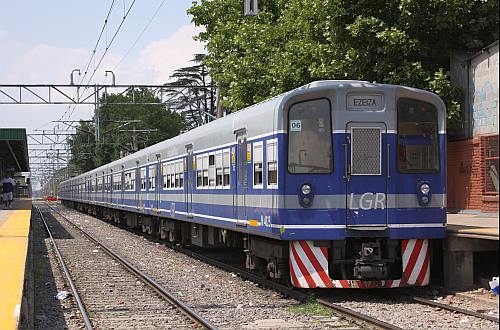 Toshiba emus on the Roca line will be superseded by Chinese-built trains from next year.
Photo Credit: Keith Fender

The trains are due to be delivered between June and December 2014, meaning that by January 2015 only brand new trains will be in use on the Roca electrified lines.

The "Roca" network was partially electrified at 25kV ac in the early 1980s, with 44.6km of electrified double-track from Buenos Aires' Plaza Constitución station to both Ezeiza and Glew via Temperley. The wires were later extended by around 10km south from Glew to A Korn and work has been underway for several years to gradually electrify the Temperley – La Plata section.

A fleet of emus was supplied by Toshiba in 1982-85 and 177 of these vehicles remain in service. A small number of former Portuguese Trains (CP) emus are also in use. The new trains will increase capacity by around 50% and are also likely to be used for services on the extended network when electrification is completed.

The Roca contract is the latest in a string of orders from Argentina for Chinese manufacturers. CSR is currently supplying 24 locomotives and 160 coaches for the San Martin commuter line and has a contract for 409 third-rail emu cars for the Sarmiento and Mitre commuter lines. Meanwhile CNR has contracts to supply 20 diesel locomotives and 220 coaches for long-distance services as well as 45 metro cars for the Buenos Aires Subte, which are now entering service.