Construction is expected to proceed in the coming days. 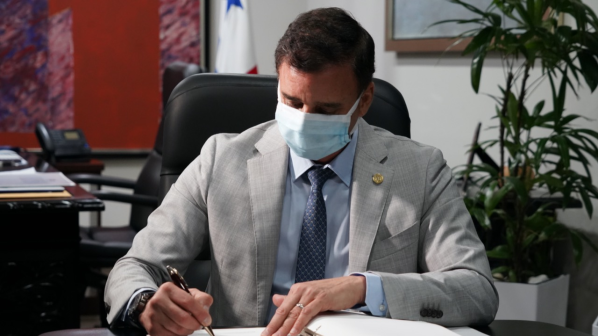 PANAMA’s comptroller general, Mr Gerardo Solís, has approved a contract and financing for the construction of the Metro Line 3 monorail project, with work expected to proceed in the next few days.

Construction will be carried out by the HPH Consortium, comprising Hyundai Engineering and Construction and Posco E&C, under a $US 2.06bn design, construction and financing contract awarded in February 2020.

The approval was given in the presence of the metro’s director general, Mr Héctor Ortega, Korean ambassador, Mr Choo Won Hoon, and representatives of the project’s contractors. It is the last step before issuing the green light to begin construction, with an order to proceed expected in the next few days.

The 58.5km line will connect the Panamá Oeste with Panama City and is being developed in two phases.

The 24.5km 14-station Phase 1 will link Albrook with Ciudad del Futuro and is primarily comprised of elevated line with a 5.3km tunnel. Phase 1 will be built over 54 months with a scheduled mid-2025 completion date. The section will be partially funded through a Yen 29.6bn ($US 280.6m) loan agreement with the Japanese International Cooperation Agency (Jica), signed in 2016.

The 34km second phase will extend the line from Ciudad del Futuro to La Chorrera. When complete, the line will reduce end-to-end travel times during peak times from 90 minutes to 45 minutes.

The line will be operated using a fleet of 28 six-car trains equipped with regenerative braking, supplied by a consortium of Hitachi, Hitachi Rail STS and Mitsubishi under a $US 883m contract awarded in October 2020. The contract also covers the provision of electrification, signalling and communications and control systems for the line.

“This is a project that will benefit more than 500,000 people in West Panama and that will strengthen the economy of the province, generating more than 5000 direct and indirect jobs,” Ortega says.