RAILROAD Development Corporation (RDC), United States, has finally won a six-year fight for compensation over the forced termination of its Guatemala Railways (FVG) concession and has been fully reimbursed with a payment of $US 14.6m. 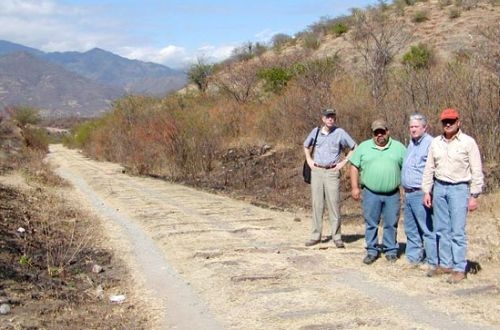 Track and other assets were stolen very soon after FVG ceased operations.

FVG won a 50-year concession in 1997 to revive the national railway which had been closed by the Guatemalan government the previous year. After RDC had successfully revived and operated the railway for seven years, the government issued a presidential decree in August 2006 which declared FVG's rolling stock contract "harmful to the interests of the state."

"The decree was issued after RDC refused to give into the government's extortionate demands to renegotiate and surrender its key economic rights under the concession contracts," says RDC, stating that the decree caused FVG's railway business to collapse due to commercial uncertainty and political manoeuvring.

Ultimately, RDC was forced to shut down FVG's operations in Guatemala and the final train ran in September 2007. "Since then the railway has literally disappeared, with even steel bridges being stolen for scrap in broad daylight," says RDC.

In June 2012 a tribunal of the International Centre for Settlement of Investment Disputes (Icsid) ruled that Guatemala had violated the minimum standard of treatment under the Dominican Republic-Central America Free Trade Agreement (Cafta) by engaging in conduct that was arbitrary, grossly unfair and unjust, and awarded RDC full reparations. RDC also defeated two sets of jurisdictional objections by Guatemala. The tribunal awarded RDC damages and compound interest and ordered Guatemala to pay for a share of the tribunal expenses. However, on full payment of the award, RDC was obliged to surrender its 82% interest in FVG to the Guatemalan government.

"The loss of the railway for a second time was a national tragedy, and it can truly be said that there were no winners in this case," says RDC and FVG chairman Mr Henry Posner III. "But this now offers Guatemala the opportunity to once again look to the international railway investment community to develop the urban train, dry canal, Mexican rail link and other projects that the country aspires to. In this regard we pledge our full cooperation and support."

RDC's Guatemalan counsel, Mr Juan Pablo Carrasco, commented: "RDC did not come to Guatemala for a long international litigation; it came to rebuild and operate a railway for the benefit of Guatemala. However, its commitment to Guatemala did not waver when it was blocked by the system. Instead, it vowed to change the system for the better, and that was achieved in this case. This result is an important precedent for Guatemala which strengthens the rule of law and shows that stability and protection of foreign investment is the key for the future development of the country."