A full-size mock-up of the forthcoming Alstom Metropolis train for Guadalajara metro Line 3 was unveiled in the city’s northern district of Zapopan on August 9 by Mr Rodolfo Guadalajara Gutiérrez, managing director of metro operator Siteur, and the governor of the Mexican state of Jalisco Mr Aristóteles Sandoval Díaz. 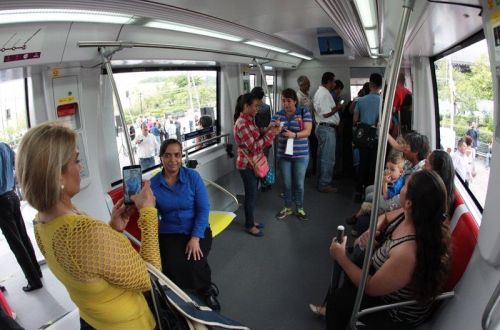 Mexico’s Federal Secretariat of Communications and Transport (SCT) awarded Alstom and CPVM, a subsidiary of Spain’s OHL, a €380m contract in November 2014 to supply railway systems for the 21.5km line from Periférico Zapopan to Central Camionera. Alstom’s share of the contract is worth around €240m and encompasses 18 three-car articulated metro trains, electrification, signalling, and telecommunications.

Each 52.8m-long, 2.89m-wide Metropolis set will accommodate up to 589 passengers. Siteur says Line 3 will be one of the first fully-accessible urban rail lines in Latin America and the trains have been designed to meet the needs of passengers with reduced mobility.

The 80km/h 1.5kV dc trains are being assembled at Alstom’s Santa Perpetua plant near Barcelona, and the first train is due to be delivered to Guadalajara in December. Dynamic testing is expected to begin on Line 3 in March 2017.

The mock-up will remain on public display in Zapopan for the next two weeks, before going on a promotional tour of the city.