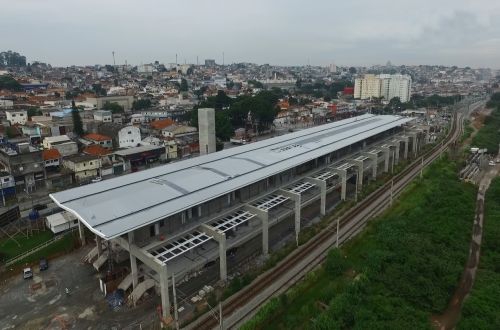 The new Engineer Goulart station is due to open next month.

The 12.2km line will be the first rail link between the city centre, the airport and the Guarulhos region. Demand projections indicate that the new line will initially carry around 130,000 passengers per day, with the fare set at the standard metro rate of Reais 3.80 ($US 1.21).

Construction began on the Reais 2.3bn project at the end of 2013 and involved the construction of 4.3km of surface alignment and 7.9km of viaduct. Mr Jackson Teixeira Eugênio, CPTM manager of works and expansion, says the project represents a major civil engineering challenge, with numerous oriver and highway crossings.

The line will serve at new stations at Guarulhos Airport and Guarulhos-Cecape, the latter an interchange for long-distance bus services.

The existing Engineer Goulart station is being completely rebuilt and expanded as part of the Line 13 project, and is due to reopen in August.

In common with existing CPTM lines, Line 13 will operate between 04.00 and 00.00 using a fleet of eight eight-car trains, which will have luggage compartments. Tendering for the train fleet is underway and CPTM says the bidders’ proposals are currently undergoing technical analysis.

The French Development Agency (AFD) has provided Reais 1.13bn for civil works and infrastructure, with the state of São Paulo contributing Reais 458.8m and the Brazilian National Development Bank (BNDES) Reais 425.8m. Rolling stock is being financed through a Reais 316.7m loan from the European Investment Bank.

CPTM has recently completed a feasibility study into the extension of the line, although the continuation of this project is conditional on the availability of financial resources.