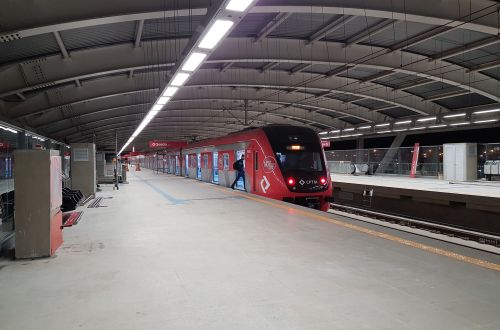 The 12.2km line has three stations: Guarulhos-Cecap, Airport and Goulart Engineer, which has been rebuilt to accommodate the new service and integrate with Line 12-Safira, which runs from Brás to Calmon Viana.

The level of service available will increase over the first four months of operation. During the first month, assisted operations will take place with trains running at intervals of around 30 minutes from 10.00-15.00 on Saturdays and Sundays, with journeys taking 15 minutes. In the second month, the operation will occur at the same time, but will be extended to every day of the week. In these first two stages, the service will be free for passengers.

Regular services will begin during the third month of operation, with trains running from 04.00 to 0.00. In addition, a new Connect service will be introduced between Brás Station and Airport-Guarulhos station at peak times and will not require a change of trains at Goulart. The trip will take 35 minutes and will cost Reais 4, the same as the metro.

A direct Guarulhos - Luz Airport-Express service will begin operating in the fourth month of operations. The journey will take around 35 minutes and the trains will depart four times per hour in both directions. The tariff for this service is yet to be confirmed.

At this point, the new line is expected to carry around 120,000 passengers per day.