THE government of the Brazilian state of São Paulo announced on June 7 that TC-Linha 4 Amarela, a consortium of Comsa and Tiisa Infraestrutura e Investimentos, has been selected to complete the second phase of metro Line 4. 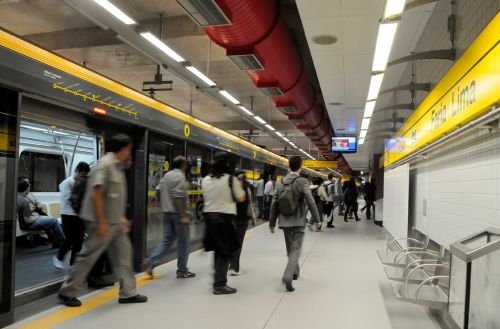 A consortium of Isolux-Corsan and Corvium was awarded the phase 2 contract in 2012, but the agreement was terminated last July after the contractor failed to complete the works on schedule. Only one of the stations, Fradique Coutinho, was completed before the contract was terminated. The consortium says the construction delays were caused by contractors appointed by São Paulo Metro and were not the result of its own management of the works.

Phase 2 comprises the completion of the two-station western section of the line from Butantã to Vila Sônia, which is already used by trains travelling to and from the depot, together with the completion of three intermediate stations on the initial operating section between Butantã and Luz.
Ten proposals were received for the contract to compete the project and TC-Linha 4 Amarela submitted a bid of Reais 858.7m ($US 250m).

The interchange with the future metro Line 6 at Higienópolis Mackenzie on the initial operating section of Line 4 is due to be completed within a year of contract signing, while Oscar Freire station will open within 15 months. Services are expected to begin operating to São Paulo-Morumbi and Vila Sônia in 2019.

When phase 2 is completed Line 4 will be 12.8km long with 11 stations. The first phase of the driverless line opened in 2010.