THE proposal to build a transcontinental railway linking Brazil and Peru - the Bi-oceanic Railway - has hit a stumbling block on the choice of the best route through Peru. 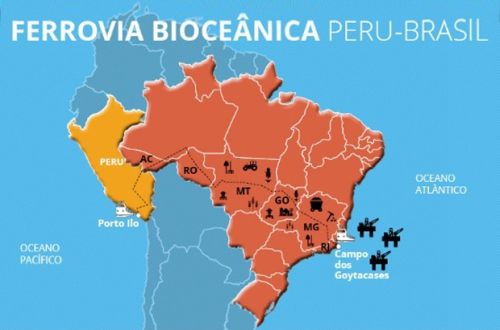 Route of the proposed Bi-oceanic Railway.

This was reported by Mr Dino Antunes Dias Batista, secretary of development and partnerships of Brazil’s Ministry of Transport, Ports and Civil Aviation, during a recent hearing at the Infrastructure Services Commission of Brazil’s Federal Senate.

According to the basic technical viability study, the total length of the Bi-oceanic Railway will be 4900km, of which 3300km would be in Brazil and 1600km Peru. The railway would start in Campinorte in the Brazilian state of Goiás, and pass through Mato Grosso, Rondônia and Acre states to reach the Peruvian border where it would turn south to reach Porto Ilo on the Pacific Coast.

According to Batista, Peru wants the railway to pass through an Andean region which is a politically important for the country but which is 4000m above sea level. Adopting this route would cost Reais 20bn ($US 6.3bn) more than a route preferred by the Brazilian government which passes through a region which is 2700m above sea level. The total cost in this case would be Reais 50bn.

Another problem is the different track gauges in Brazil, where the new railway will be 1600mm gauge, and Peru which uses standard gauge. This could require transhipment of freight at the border, making the railway less attractive to shippers.

“Since the Peruvian election last year, the dialogue has been difficult,” Batista admits, but he says the Brazilian government has been working hard to resume dialogue on the project.

The Bi-oceanic Railway is a strategic project to create an alternative outlet for Brazil to the Pacific Ocean and better access to Asian markets. Another important feature of the railway is its integration with the North-South Railway (FNS) in Campinorte, which would facilitate access for farmers to the existing rail network and Brazilian ports.