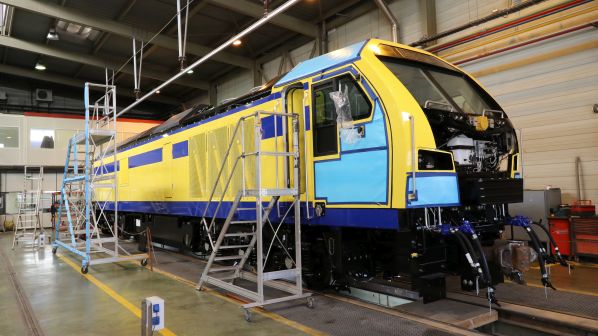 The three six-axle units were ordered in early 2018 in a deal which includes an option for a further three locomotives.

The SALi design incorporates relatively low axle weights and a 1865kW Cummins QSK60 diesel engine which is mounted on ‘silent blocks’ to minimise vibration and noise.

The locomotive is equipped with six traction motors and an IGBT traction converter supplied by ABB. It has a nominal top speed of 100km/h although the FCA infrastructure will limit operation to a maximum of 60km/h.

SALi features AAR design bodyshells made from carbon steel and AAR buckeye couplings. Fully-enclosed cabs are equipped with a HVAC system to cope with the extremes of temperature on the route.

The locos are derived from Stadler European designs such as UK Light (class 68) and the Euro 4000, incorporating an internal corridor for train crew linking the two cabs.

The locomotives will be used to haul trains of mineral ore on behalf of Empressa Minera San Cristóbal, one of the world's largest producers of both silver and zinc.

The FCA SALi has a starting tractive effort of 415kN and is specifically designed for high-altitude operation as parts of the route are more than 5000m above sea level.

A 6000-litre fuel tank is fitted to minimise the need for regular refuelling.

Once all commissioning tests have been completed at Stadler's factory in Spain the three units will be shipped to Antofagasta, Chile, in May. They are expected to be commissioned and enter service in Bolivia in September/October 2019. Operation to and from Arica in Chile is anticipated in normal service.

Stadler and FCA hope SALi will become the standard locomotive for the proposed Bioceanic Integration Railway Corridor which will link the Peruvian port of Ilo with Bolivia and the port of Santos near São Paulo in Brazil.