HUNDREDS of residents lined the streets of the historic city centre of Cuenca on July 27 to witness the inaugural test run on the Ecuadorian city’s first light rail line. 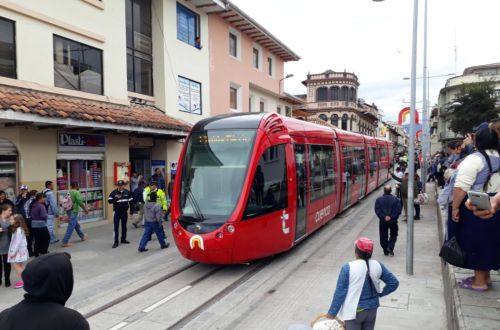 The Alstom Citadis low-floor LRV made a return journey along an 8.5km stretch of the 10.2km line for structural gauging checks and testing of overhead catenary and Alstom’s APS ground power supply system, which is installed on a section of the line in the city centre.

Construction began in November 2013 and the project was originally due for completion at the end of 2015, but work came to a halt when the city unilaterally terminated its contract with the Cuatro Ríos de Cuenca Consortium (CCRC), which was responsible for civil works. At the end of last year the city appointed ACTN, a consortium of Alstom, CIM the NGE Group (including its TSO track subsidiary) to complete the project.

The mayor of Cuenca, Mr Marcelo Cabrera, said on July 27 that the line will now be completed in October, in accordance with the terms of the contract signed with ACTN.