THE interurban passenger line under construction between Mexico City and Toluca has reached a milestone with the first of two Tunnel Boring Machines (TBM) breaking through the 4.7km long twin-bore Vía Derecha tunnel on June 14. 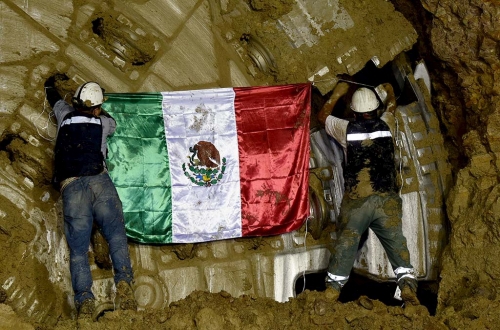 Boring of the first tunnel on the Mexico City - Toluca line has been finished.

TBM S-948 broke through the 4740m-long right tunnel, while work on the second 4719m-long left tunnel is set to be completed in the next few days. The TBMs also installed 6312 pre-cast concrete lining segments, which have a diameter of 8.57m, and removed 285,000m3 of material.

Construction on the 57.7km line, which is scheduled to open next April, began in 2015 and is now 80% complete with civil works expected to finish in November.

Mexico’s Department of Transport (SCT) head Mr Gerardo Ruiz Esparza says the project, which was budgeted at Peso 44bn ($US 2.1bn), was now expected to cost Peso 52bn due to inflation and fluctuations in the exchange rate, as well as changes to the original plans.

Spanish engineering company Sener was responsible for detailed design and project manager Jordí Redó says they were able to reduce the length of the tunnel from the 27km established in earlier studies to 4.8km.

“The final stretch, which is already under construction, is 57km, of which almost 50km are over viaducts of different types,” says Mr César Quevedo, Sener’s general manager of infrastructure and transport.

“Each viaduct will have a solution adapted to its location along the route, allowing the line to cross the Sierra de las Cruces conservation area while guaranteeing total respect for the environment.”

Dynamic testing on the line began on June 12, 2017, when a CAF Civity EMU ran under its own power at slow speed between Zinacantepec and Pino Suárez stations.

The six-station line is forecast to carry around 230,000 passengers a day and will offer a 39-minute journey time between Zinacantepec and an interchange with the Mexico City metro at Observatorio.