ALPTRANSIT Gotthard has carried out a series of test runs in the Gotthard base tunnel with a 1500m-long freight train in preparation for the opening of the 57km tunnel later this year. 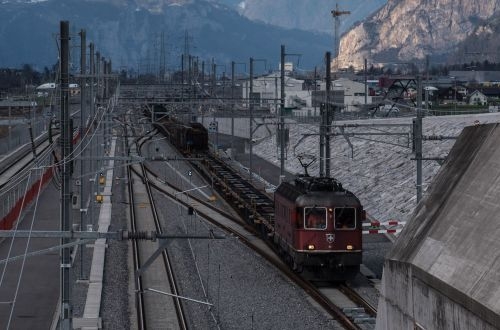 The test run was made by a 2216-tonne unloaded train with 76 flat, telescopic, and container wagons, with traction provided by three 8MW Swiss Federal Railways (SBB) Re 620 locomotives, which were positioned at the front, centre, and rear of the formation.

The objective of the tests was to establish whether a freight train of this length could operate in the tunnel under ETCS Level 2 should the need arise.

Around 3500 test runs will be carried out before AlpTransit hands the tunnel over to SBB at the opening ceremony on June 1. SBB will then carry out its own programme of trial runs in the tunnel before the start of full commercial operations on December 11.