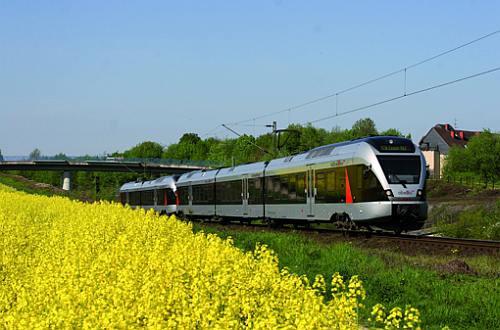 Three public transport authorities, Rhine-Ruhr Transport Association (VRR), Nahverkehr Rheinland (NVR) and Zweckverband Westfalen-Lippe (NWL), awarded the contracts after completing a European-wide open competition. The decisions taken by the public transport authorities will become irrevocable after a 10-day period in which appeals can be filed against the decisions.

Abellio is to retain its regional passenger concession for the Ruhr-Sieg network for another 15 years. This contact, which becomes effective in December 2019, consists of the following lines:

Services will be operated using Stadler Flirt EMUs, which will couple or split during their journey to create more through services to avoid passengers having to change trains.

NWB retains the Emscher-Münsterland network contract and adds the Essen - Dorsten - Borken and Dorsten - Coesfeld contracts to its portfolio. The contract for the two lines starts in December 2018 and will last three years.

As part of the agreement, frequencies will be increased, particularly at weekends. A 30-minute-interval S-Bahn service will be introduced between Essen and Dorsten in December 2019, while services will be extended to Essen-Steele, creating a 5-minute-interval on the section from Gladbeck West to Essen-Steele in combination with other lines. More direct connections will also be created using Talent DMUs, combining and splitting in Dorsten.

Tenders have been invited for hydrogen-cell powered trains to be introduced starting in 2021.

DB Regio will remain the operator of the Mönchengladbach - Cologne - Bonn Beuel - Koblenz line for 15 years when the new contract starts in December 2019 and on the Aachen - Lindern - Heinsberg/Mönchengladbach - Duisburg - Essen line for 14 years when a new contract starts in December 2020. DB Regio is planning to purchase a fleet of three-car and five-car Alstom Coradia Contintental class 440 trains for these services.