All Dutch electric trains to run on renewable energy

EXACTLY a year after the COP21 climate conference in Paris, Netherlands Railways (NS) has announced that all electric trains on the Dutch network will operate exclusively using power from renewable sources with effect from January 1 2017, a year earlier than originally envisaged. 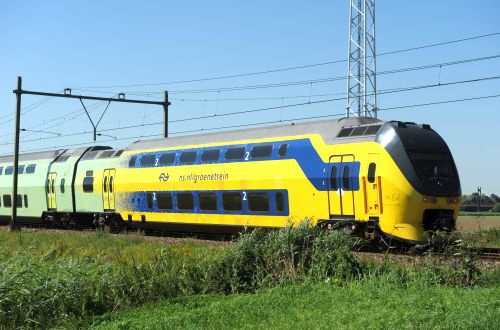 The move affects both passenger and freight operators as the entire Dutch railway sector purchases traction energy collectively. Based on a 10 year contract, the sector is purchasing 1.4 terawatts per year, of which 1.2 terawatts is used for traction.

Despite reaching its 100% green milestone, NS is to continue its energy-saving programme with investment in measures to reduce rolling stock energy consumption, such as more efficient traction systems or LED lighting.

NS made the announcement during the Dutch national climate conference in Rotterdam, and called upon companies and passengers to make their mobility cleaner and more sustainable.

In a cooperation with the Ministry of Infrastructure and Environment, the Dutch employer’s federation (VNO-NCW) and the association Nature & Environment NS has started working with 15 large companies, which employ some 200,000 people, on project to foster sustainable mobility.

The main goal is to encourage a modal shift from cars to bikes, public transport and electric transport, incentivising changes in commuting behaviour through more favourable secondary labour conditions, such as the reimbursement of travel costs, parking policy, and housing.

The programme builds on the Low Car Diet programme, which started two years ago. Around 60% of participants in the programme are still using more public transport while 50% have increased their bicycle travel.