ITALIAN open-access high-speed operator NTV and Alstom have unveiled the design for the eight Pendolinos which NTV ordered in a €460m contract placed in October. 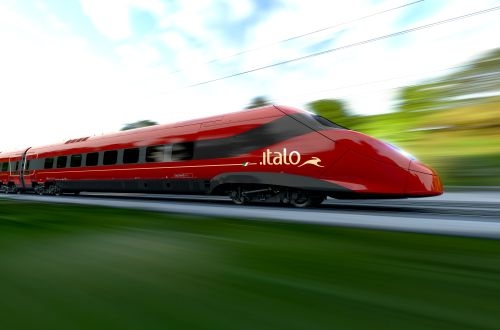 Mr Flavio Cattaneo, NTV CEO, and Mr Pierre-Louis Bertina, Alstom's managing director in Italy, presented designs of the new 187m-long, seven-car train which is fire red and features a futuristic front-end designed to enhance crash protection. The 250km/h trains will accommodate around 480 passengers and comply with the 2014 European Technical Specifications for Interoperability (TSI), which guarantees high-levels of safety and efficiency.

Alstom's Design and Styling Centre designed the train and Alstom says the interior is set for selection and presentation to the public in the coming months.

The new Pendolinos will be branded Evo and complement NTV's existing fleet of 25 Alstom AGV high-speed trains. Ridership on NTV services has risen 40% in 2015 to more than 9 million passengers and the new trains will enable the operator to expand its network to additional destinations in northeast and northwest Italy.

The Pendolinos will be built at Alstom's Savigliano plant in northwest Italy and maintained alongside the AGVs at NTV's depot at Nola, near Naples. Delivery is due to start in 2017.