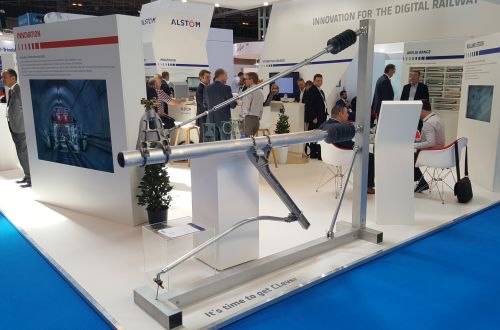 CLever is designed for 300km/h operation and has been certified by British infrastructure manager Network Rail for a maximum speed of 200km/h. It has a non-circular barrel cross-section which reduces weight. Alstom says a single CLever cantilever section weighs 52kg, compared with 67kg for other types of cantilever catenary, and has 13 components, compared with 34 for other systems.

This not only reduces costs but also installation time. Alstom says a single cantilever will take 48 minutes to install and 18.8 minutes to register. Alstom also says CLever complies with a 10 million-cycle fatigue test.

Alstom also presented details its Coradia UK EMU concept at Railtex. The fully-TSI compliant 25kV ac train will be offered in 4-11-car formations with vehicle lengths specified by the customer. Extruded aluminium will be used for bodyshells and the train will have a floor height of 1145mm.

Alstom says it has developed a new inside-frame bogie for British applications, although the train will also be made available with other bogie types. The maximum speed will range from 145km/h to 200km/h depending on the application, with potential for a 225km/h variant.