JOURNEY times for the hourly inter-city service between Amsterdam and Brussels were cut by half an hour on April 9, when trains were re-routed to run via the entire length of HSL South in the Netherlands and Belgium’s high-speed Line 4. 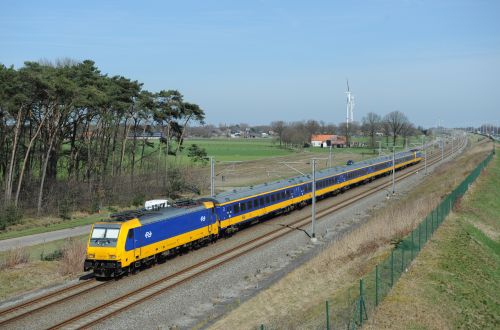 The rerouting of these services means some Dutch stations - including Leiden Central, The Hague Hollands Spoor, and Dordrecht - have lost their direct rail connection to Belgium after 60 years.

However, the new stop Noorderkempen adds a park-and-ride station with good highway access, which may help to attract commuters travelling to Amsterdam, Rotterdam, Antwerp and Brussels.

The rerouting of the service via the high-speed line has reduced the journey time from 3h 23min to 2h 53min. However, this is still slower than the original Benelux IC service, which offered a 2h 51min trip between Amsterdam and Brussels in 2010, the final year of operation before the introduction of the ill-fated Fyra high-speed service.

A supplement is payable for domestic Dutch travel on this service, which operates under the IC Direct brand on the Dutch section of the route.

The new cross-border operation has been tested extensively by NS and SNCB, reflecting lessons learned in the aftermath of the Fyra debacle.

Initially it was planned to operate the service with one locomotive and a driving trailer in push-pull mode. NS began making preparations to adapt the coaches for operation with class 186s and equipping them with ETCS, but these modifications proved to be complex and problematic, and the plan was ultimately abandoned.

With the rerouting of Amsterdam - Brussels services, NS has fulfilled the final requirements of the ‘agreement’ it made with the Dutch government in the wake of the Fyra debacle. Another requirement fulfilled is the introduction of Eurostar’s London St Pancras - Amsterdam Central International high-speed service, which began operating on April 4.