GERMAN Rail (DB) subsidiary Arriva Spain confirmed on May 7 that it has filed a request before the Spanish rail regulator to establish international passenger services connecting A Coruña with Porto. 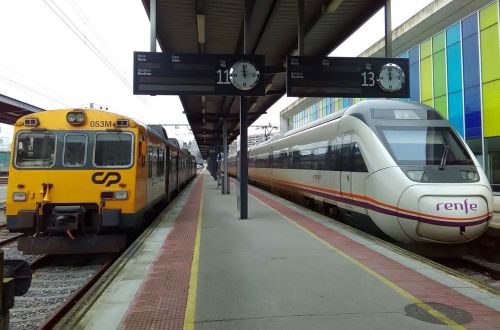 With launch targeted for the second or the third quarter of 2019, it would not only be the first international service in both Iberian countries according to the European Union third railway package rules but also the first open-access operation over a Spanish high-speed line.

Arriva’s offering would initially comprise four services in each direction over the Atlantic Corridor, an Iberian-gauge high-speed line with a maximum design speed of 250km/h, which was completed in 2015.

Trains will call at Santiago de Compostela and Vigo-Guixar stations (Renfe high-speed services currently use the Vigo-Urzaiz terminus) before continuing into Portugal via the conventional single-track line with stops at Valença do Minho, Nine and Porto-Campanha.

According to Arriva, the 342km-long trip will take 2h 46min, thanks to both the ongoing electrification works south of Vigo and the deployment of ETCS on the Atlantic Corridor, where the maximum line speed has so far been restricted to 200km/h due to the technical limitations of the Spanish Asfa signalling system.

Publicly-owned operators Renfe and Portuguese Trains (CP) currently offer a jointly-operated service from Vigo-Guixar to Porto using Renfe class 592 DMUs. These ageing trains only offer standard class accommodation with no onboard services and a journey time of 2h 20min between Vigo and Porto.

Arriva has not confirmed what type of rolling stock it intends to use. The DB subsidiary has extensive experience operating bus routes in Galicia, a region where it transports more than 5 million passengers per year with a fleet of 224 road vehicles and a staff of 300.