AFTER several months of uncertainty, an agreement has finally been reached between Austria's infrastructure manager and open-access operators over access to two new lines which can only be used by rolling stock equipped with ETCS Level 2. 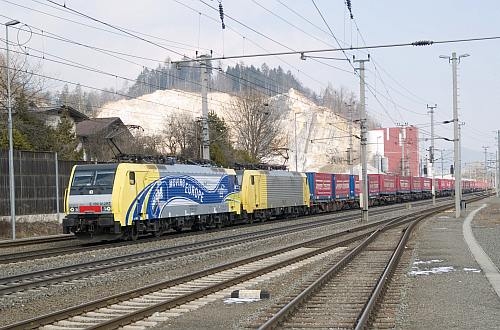 The opening of the Kundl – Baumkirchen line on the Brenner route in western Austria and the St Pölten – Tullnerfeld – Vienna line on December 9 was due to see the rerouting of freight trains onto the new infrastructure. This would have caused problems for open-access operators using locomotives that are not equipped with ETCS.

However ÖBB Infrastructure and open-access operators have agreed that for the time being freight trains without ETCS may continue to use the existing Wörgl – Innsbruck and Vienna – St Pölten lines.

Previously ÖBB Infrastructure had insisted that from the start of the 2013 timetable freight trains would be banned from the existing Wörgl – Innsbruck line due to noise issues, but open-access operators have now been allocated paths on this line.

ETCS will be activated on the Innsbruck – Brenner line in spring 2013, which means that class 186 electric locomotives already equipped with ETCS, but without the specific transition requirements between ETCS and the standard Austrian PZB 90 system, will be able to use the Kufstein – Brenner corridor.

During 2013 and 2014 other types of locomotives including classes 185, 189, and 1216 will be retrofitted to integrate ETCS and PZB, which will allow all freight trains to be diverted onto the new line.

Meanwhile between St Pölten and Vienna ÖBB has agreed to postpone the nocturnal closure of the St Pölten – Herzogenburg – Tulln line. This will allow heavy freight trains to reach Vienna without a pilot locomotive, which would have been needed on the gradients of the existing line via Rekawinkel. With the retrofitting of ETCS to locomotives used by open-access operators due to be completed by 2014, this problem also looks set to be resolved.