PLANS to build a rail link to Basle's bi-national airport, Euroairport, located over the Swiss border in France, have been revived by Mr Philippe Richert, president of the Regional Council of Alsace, who is pushing for the project to be realised by 2020. 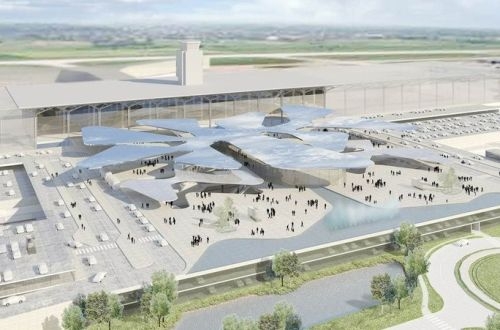 Artist's impression of the proposed partly-underground station at Basle airport.

Plans for a rail link have been under discussion for years but foundered on the question of finance. Now the proposal have been given fresh impetus by Richert who stated this week that the project, which involves building a 7km branch line off the Basle - Mulhouse main line, must go ahead.

According to Richert, the scheme would come under the next seven-year agreement with the French government for major infrastructure projects, on which a decision will be taken in June.

Funding for the €260m project is expected to come from a number of sources. The French government and the Alsace regional government are each expected to contribute €35m or €40m, plus €10m from Upper Alsace, and €5m from Mulhouse. The airport authority would contribute €40m, and €50m has been promised by the European Union. The remaining €70 - 80m would be covered by the Swiss government, plus €10m from the adjoining German state of Baden-Württemberg.

Richert says the project must be independent of other pending issues concerning the bi-national status of Euroairport and its tax situation. A solution is pressing, as the bus service currently serving the airport from Basle is hopelessly overloaded, especially at peak times.