PROPOSALS to significantly reduce the use of diesel traction on regional services in southern Germany were presented to the Bavarian cabinet by the state’s transport minister Mr Joachim Herrmann on January 23. 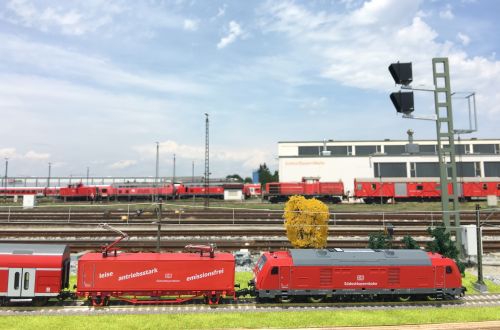 Model of the Eco DeMe Train , which will enable diesel locomotives to operate in electric mode on the Munich - Mühldorf line.
Photo Credit: DB AG

The Bavarian Rail Electromobility Strategy (Bess) aims to support the federal government’s 2050 climate protection plan and reduce air pollution in urban areas both through the extension of electrification and adopting innovative traction technologies.

Bess proposes accelerating the electrification of key diesel-operated regional lines, while pilot projects look at the viability of alternative forms of traction which could ultimately enable the state to reduce the reliance on diesel on other secondary routes.


Herrmann says these lines have been selected on the basis of cost-benefit analysis and environmental considerations, including a reduction in diesel operation under-the-wires. Electrification of the seven lines would cost around €600m.

Around 49% of Bavaria’s 6700km railway network is currently electrified and the electrification of the Munich - Lindau route, which began last year, will push this past 50% by 2021.

The second pillar of Bess is based on the adoption of innovative traction technologies. “We are focussing on routes where there are no concrete plans for electrification,” Herrmann says. “Here, we want to get pilot projects up-and-running quickly.”

German Rail (DB) subsidiary Südostbayernbahn (SOB) is taking part in the Eco DeMe Train project, which has been launched with the aim of reducing diesel operation under the wires.

The project involves the development of a purpose-built pantograph car, which will operate with SOB’s Bombardier class 245 Traxx DE ME multi-engine diesel locomotives, providing power for the locomotive’s traction motors.

DB says it will be possible to equip the pantograph car with a fuel cell or energy storage system to enable catenary-free electric operation,

Currently the class 245s used on the Munich - Mühldorf line operate under the wires as far as Markt Schwaben. With eight Eco DeMe trains in service, it is estimated that SOB could reduce nitrogen oxide emissions (NOx) on the Munich - Markt Schwaben section by around 21,500kg a year - the equivalent to the annual NOx emissions of around 12,500 Euro 6 diesel cars.

Dresden Technical University has developed the high-voltage electrical concept for the Eco DeMe Train, while Nuremberg Technical School has designed the electrical interface between the locomotive and the pantograph car. Economic analysis of the project was conducted by Chemnitz technical university and Deggendorf technical school is responsible for ecological evaluation of the technology.

DB says trials with the Eco DeMe Train will begin in the near future.