BULGARIA celebrated the completion of a 10-year project to modernise its principal rail link with Greece and Turkey on May 15, when prime minister Mr Boyko Borissov and minister of transport, information technology, and communications Mr Ivaylo Moskovski attended a ceremony marking the conclusion of the upgrading of the 154km Plovdiv – Dimitrovgrad – Kapikule (Turkish border) line. 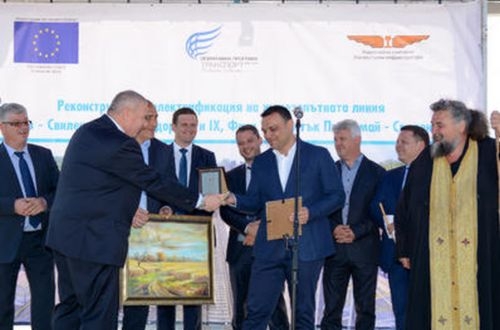 The final Lev 424m ($US 243m) phase of the project involved track upgrades, renewal of signalling and telecommunications, and electrification on the 67.2km section from Dimitrovgrad to Simeonovgrad, Svilengrad and the Turkish and Greek borders.

The modernisation of the line raises the maximum speed to 200km/h for tilting trains, 160km/h for conventional passenger trains, and 120km/h for freight trains.

The project was funded through the European Union's Operational Programme Transport 2007-13.