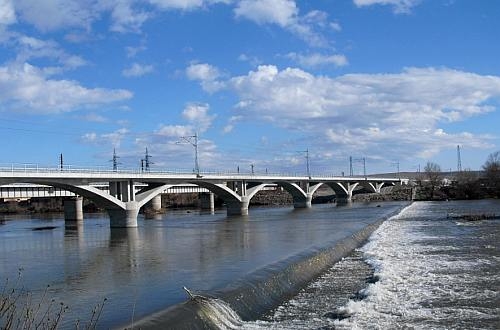 The electrified single-track line is designed for 160km/h operation and includes a new 433m-long bridge across the Maritsa River (pictured) at Svilengrad. The line was designed and built by Czech contractor OHL ZS under a Lev 70m ($US 47m) contract signed with National Railway Infrastructure Company (NRIC) in May 2009, while a consortium of Alcatel-Lucent and Thales was responsible for signalling and telecommunications. The line is electrified at 25kV ac 50Hz and is equipped with ETCS Level 1.

The railway is the first Bulgarian project to be completed under the European Union's Operational Programme on Transport 2007-13, which contributed Lev 46.6m in cohesion funding towards the Lev 85.8m project. The remainder of the project was financed by the Bulgarian government through NRIC.

The opening of the line marks the completion of the third phase of the upgrading and electrification of the 154km Plovdiv – Dimitrovgrad – Kapikule (Turkish border) route, which forms part of European Corridor 10 Branch C (Niš – Sofia – Plovdiv – Edirne – Istanbul). The fourth and final phase covers the 67.2km section between Dimitrovgrad and Svilengrad.

On the Turkish side of the border, the line between Kapikule and Istanbul is expected to close this summer for reconstruction, and freight operators are currently looking at options for alternative terminals.