Services from five new cities to Frankfurt Airport will begin later this year. 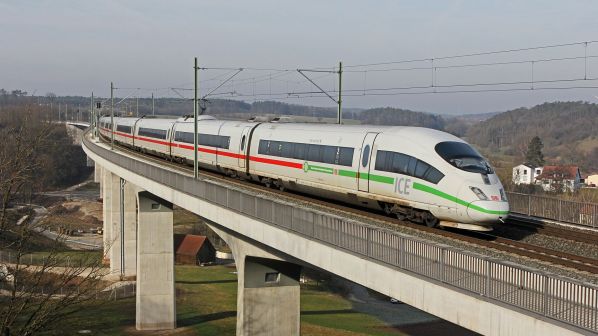 GERMAN Rail (DB) and German airline Lufthansa have announced plans to connect a further five cities to the Lufthansa Express Rail network in the second half of this year using extra-fast Sprinter trains.

The service will expand to Frankfurt Airport from Hamburg and Munich from July, with additional connections to the airport from Berlin, Bremen and Münster from December. This will coincide with the launch of new sprinter services that will reduce the Munich - Cologne journey time to under four hours. Two daily return services without intermediate stops will be introduced from Munich and Nuremberg to Frankfurt Airport, further reducing the journey time by half an hour.

DB and Lufthansa already offer 134 daily services from 17 cities to Frankfurt Airport, following a previous expansion of the scheme in July 2020 to include services to and from Hannover, Leipzig and Basle.

“With this initiative we are strengthening the mobility offer in Germany and thus the domestic business location,” says Mr Harry Hohmeister, a member of Deutsche Lufthansa’s executive board. “By intelligently linking rail and air transport, we offer our customers a seamless and convenient travel chain. Networked and integrated mobility benefits consumers and the environment.”

“A good cooperation is now turning into a comprehensive partnership that has never existed between Lufthansa and DB,” says DB board member, Mr Berthold Huber. “At the end of the year, DB will network the largest German airport even more closely with the railways with new sprinter connections.”

The partners also announced other improvements to the service. From April, trains will now be bookable for as long as their associated connecting flight. Lufthansa Express Rail passengers will also have access to the fast lane at security checkpoints when airport traffic increases again. In addition, when landing at Frankfurt Airport, Express Rail passenger luggage will be given priority.

The services will retain features included on other Lufthansa Express Rail services such as reserved seats on the train, connection security, mileage credit for the train journey as well as first-class travel and access to DB’s lounges for business and first-class customers. Other features will also be added in the future.