GERMAN Rail (DB) today announced its results for the first half of 2012, revealing passenger numbers rose by more than 4% compared with the same period last year despite the uncertain economic outlook. Ridership increased by more than 40 million year-on-year to exceed 1 billion, while passenger volume increased by 4.4% to 39.7 billion passenger-km. 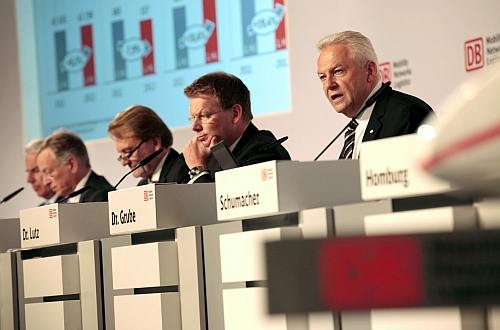 Demand for train paths fell by 0.6% to 518.5 million track-km. Private operators accounted for a record 21.7% of train path demand during the first half of the year.

Group revenues rose by 3.3% or €616m to €19.5bn, while earnings before interest and tax (Ebit) soared by 16.6% to €1.3bn. CEO Dr Rüdiger Grube described the growth in earnings as "an important step on our path to be an economically successful market leader." DB has almost doubled its Ebit since 2009.

"We are seeing a noticeable weakening of the economy, but I don't think we're on the brink of a global recession as we were in 2009," says chief financial officer Dr Richard Lutz. "I see positive developments in passenger and infrastructure over the rest of the year."

DB invested €2.6bn last year and plans to invest €4bn this year. Net capital expenditure soared by 34% in the first half to €1.4bn, while net financial debt rose slightly in the first six months of 2012. "The reduction in our debt level won't be as large this year as it was last year, but I think it's the right course to take," Lutz says.

Punctuality also improved in the first half, with 93.5% of trains arriving at their destination within five minutes of schedule, a 2.2% increase and 0.5% above DB's target. On-time performance of regional services reached 95% during this period.