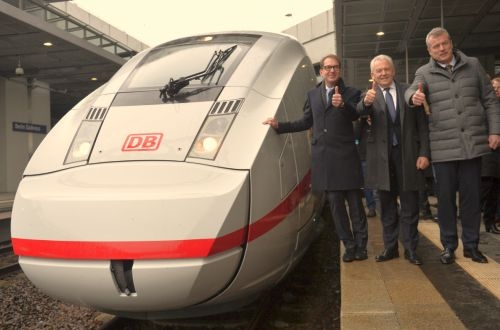 DB signed a framework contract with Siemens in May 2011 for up to 300 of the 250km/h trains (previously referred to by DB as ICx) placing an initial firm order for 130 sets (85 10-car and 45 seven-car), with an additional 90 trains planned and an option for a further 80 trains, which can be exercised at any time until 2030. In 2013 DB revised the specification for the fleet with an improved interior and increasing the 10-car trains to 12 vehicles. If all options are exercised the total value of the order could reach €5bn.

Each 346m-long distributed-traction train includes six powered vehicles providing a total output of 9.9MW and seats 830 passengers including 625 in second class and 205 in first. The 15kV ac sets are equipped with ETCS in addition to the standard German LZB and PZB signalling systems.

The modular design of the ICE 4 enables the train to be supplied in formations ranging from five to 12 cars. The trains are equipped with Siemens Rail Automation's Sibas PN control system, which comprises full train and individual car networks based on a 100Mbit/s switched ethernet connection. Each vehicle has its own computer, which only controls subsystems in one car. DB says this flexible architecture means it is easy to add and remove vehicles from a train.

Bogies were supplied by Bombardier are equipped with internal frames and bearings, contributing to a significant weight saving. At 740 tonnes a 12-car ICE 4 is 120 tonnes lighter than an ICE 1 set, which is formed of two power cars and 12 trailers, but seats 87 more passengers.

Four ICE 4s have been completed so far and two pre-series 12-car class 412 sets are currently undergoing trials on the German mainline network, reaching up to 275km/h during tests on the Ingolstadt - Nuremberg high-speed line. Trials has also been carried out on the Velim test track in the Czech Republic, which included 200km/h brake testing, while electromagnetic compatibility, train control system and commissioning of passenger information systems is being carried out at Siemens' Wildenrath circuit in northwest Germany.

Four vehicles were tested in the climatic chamber at the Rail Tec Arsenal facility in Vienna during July and August, while DB Systemtechnik has carried out tests on air-conditioning and other subsystems at its Minden test centre.

Trial operation with passengers is due to start next autumn and the ICE 4s will enter full commercial service from December 2017, replacing locomotive-hauled stock dating from the 1970s and 1980s with later deliveries superseding the ICE 1 and ICE 2 fleets.