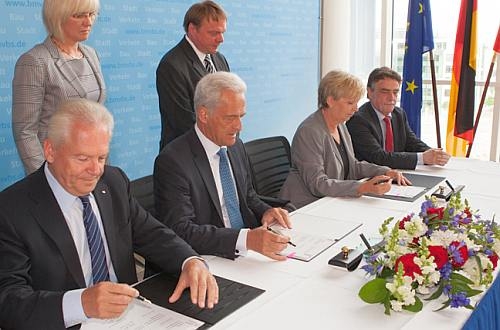 The existing line, which is part of European Corridor A from Rotterdam to Genoa, has become a major bottleneck in recent years due to the growth in freight traffic between the Dutch port and the Ruhr area of Germany. The Dutch completed the Betuweroute freight line between Rotterdam and Zevenaar in 2007, but progress on the German side of the border has been comparatively slow. "For more than 20 years we have tried to bring the Betuweroute to Germany," says Kraft "For decades, German companies have been forced to transport their goods and to and from the ports of the Netherlands through this bottleneck. This agreement means industry in North Rhine-Westphalia and Germany can finally breathe again."

The first stage of the project, which involved the installation of electronic interlockings and a new control centre at Emmerich, was completed last month. The section of 1.5kV dc electrification between Zevenaar East and Emmerich will be converted to the 25kV ac system used on the Betuweroute, bridging the gap for ac traction, and a third track will be constructed between Emmerich and Oberhausen

This will run parallel to the existing line for 46km, although 22km of the existing line will be completely rebuilt to accommodate the additional track and improve the alignment. The final 3km into Oberhausen will be expanded from three to four tracks, and the line will be resignalled with ETCS to shorten block sections.

Existing loops will be extended to accommodate 750m-long trains and 55 level crossings will be eliminated. In addition, 47 bridges will need to be reconstructed and 11 of the 14 stations will be rebuilt.

The federal government has committed €746m to the project, including €51m of European Union TEN funding, while the state government will contribute €450m. The remainder will come from DB Networks and third parties.