GERMAN Rail (DB) CEO Dr Rüdiger Grube and Saxony's state minister for economic affairs, labour, and transport Mr Sven Morlok signed an agreement on the electrification and upgrading of the 81km Leipzig – Bad Lausick – Chemnitz line on July 16 with the aim of putting Chemnitz back on the Inter-City network. 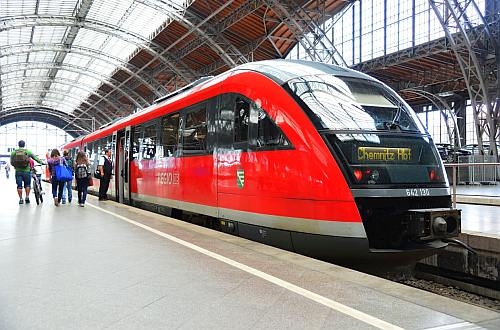 Under the deal, around €2.5m will be invested in planning, and preliminary design, including full costing for the project, and this process will be completed by the middle of next year.

Between 2004 and 2006 DB and the Federal government invested more than €100m in modernising the route for 160km/h operation, which included resignalling and track upgrading. However, DB says track-doubling on the remaining single-track sections and electrification will be necessary before long-distance services can be restored to Chemnitz, a city of 243,000 inhabitants.

"The connection of southwest Saxony to the long-distance network is a primary goal of the state," says Morlok, adding that the planning will help the state to seek support for the project from the German government as part of the 2015 Federal Transport Infrastructure Plan.

DB wants to support regional development in Saxony," says Grube. "However, we recognise that a customer-oriented and economically self-supporting long-distance traffic will only be feasible if it is faster than existing regional services."

The line is currently served by an hourly Regional Express service with a journey time of 59 minutes. Previously it has been suggested that Frankfurt-am-Main – Dresden ICE services, which are formed of two trains operating in multiple as far as Leipzig, could be extended with the second set continuing south to Chemnitz.