AFTER years of political wrangling, plans to build a standard-gauge high-speed line linking the Baltic States with Poland reached an important milestone on October 28 when the governments of Estonia, Latvia, and Lithuania signed an agreement to create a joint venture company, RB Rail, to implement the project. 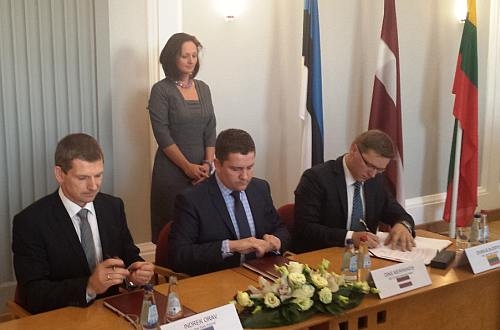 The signing ceremony was held in the Latvian capital Riga and was attended by the transport ministers of the three states.

The three countries will each hold a 33.3% share in the new company and each state has agreed to provide RB Rail with €650,000 in start-up capital.

Construction is already underway on the first phase of Rail Baltica 1 from the Polish-Lithuanian border to a new intermodal terminal at Kaunas, which is due to be completed in 2015. The next phase of the project will extend 1435mm-gauge tracks east to the marshalling yard at Palemonas.

The mixed-traffic Rail Baltica 2 will extend the line to Riga and the Estonian capital Tallinn, with the existing 1520mm-gauge line from Kaunas to the Lithuanian capital Vilnius being converted to dual-gauge. The 728km line will be designed for operation at up to 240km/h and is expected to reduce Tallinn - Riga journey times to around two hours, while Tallinn - Warsaw will be cut to around six hours. Passenger trains will operate at an average of 170km/h on new-build infrastructure.

In June 2010, the transport ministers of Poland, Lithuania, Latvia, Estonia, and Finland signed a memorandum expressing their political intent to go ahead with Rail Baltica 2, and guidelines for the development of the project were agreed in November 2011. However, the three governments have had great difficulty reaching a consensus on the project, particularly after Lithuania reversed its decision to exclude Vilnius from the route.

With an estimated price tag of €3.68bn, Rail Baltica 2 is the largest infrastructure project ever implemented in the Baltic States but as one of the key projects in the European Union's new TEN-T core network it is eligible for up to 85% funding from the EU's Connecting Europe Facility (CEF), which will allocate €26bn to transport projects during the EU's 2014-20 funding period. The formation of the joint venture was a prerequisite for the Baltic States' CEF funding application, which will need to be finalised by 2016.

RB Rail will be responsible for carrying out detailed studies, which will be required as part of the CEF funding application.