THE Danish government has announced plans to use North Sea oil revenues to finance a €3.7bn investment in the country's railway infrastructure over the next decade, which will reduce journey times between Denmark's five largest cities. 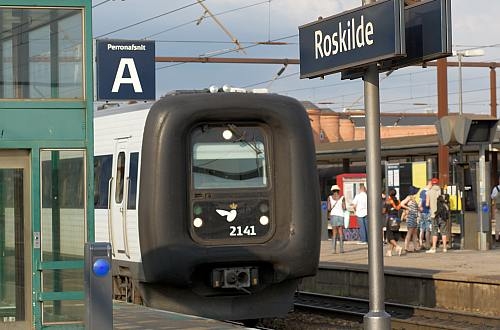 The ambitious "one hour plan" will reduce Copenhagen – Odense, Odense – Esbjerg, Odense – Aarhus, and Aarhus – Aalborg journey times to one hour or less by 2025 through electrification and track upgrades, which in some areas will include the construction of new lines.

The Odense – Aarhus line is the greatest challenge because of the circuitous nature of the existing line, which meanders through the hills of western Fyn before crossing into Jutland where it skirts around inlets to serve Vejle before heading inland towards Skanderborg. Upgrading this line will involve the construction of a new direct line from Odense to Middelfart in western Fyn, construction of a new bridge across the mouth of Vejle Fjord to bypass the town of Velje, and a new section between Hovegård and the southern suburbs of Aarhus which will avoid Skanderborg.

Vejle will continue to be served by inter-city services heading from Odense to Brande, Herning, Holstebro, and Streuer in northwest Jutland as well as regional trains using the existing main line between Aarhus and Esbjerg.

Less extensive works are required on the Aarhus – Aalborg section, which will be electrified and upgraded to achieve the required journey time reduction.

Even though Esbjerg was not originally included in the one hour proposals, the construction of the new Odense – Middelfart line will also help to reduce the Odense – Esbjerg journey time to less than an hour.

The estimated cost of these projects is €2.52bn and they are tentatively scheduled for completion by 2022.

The Odense – Aarhus line is already electrified as far as Fredericia and this will be extended to Aarhus by 2020. Electrification works will be coordinated with the rollout of ERTMS on this section.

The line from Aarhus to Aalborg will be electrified shortly afterwards, culminating with the Aalborg – Frederikshavn section, which is outside the scope of the one hour plan, by 2025.

The single track Vejle – Herning – Struer line will also be electrified by 2025, and has been included in the plans despite a relatively poor cost:benefit ratio.

The busy commuter line from Roskilde to Holbæk, is currently being double-tracked and will also be electrified, including the section beyond Holbæk to Kalundborg. The estimated cost of electrification is €1.16bn.

The extent of electrification means a significant investment in new trains will also be required, and following the botched introduction of the IC4 dmus, the government plans to order 2-3 trains of proven designs from different manufacturers before choosing a design for series production. It is possible that both regional and long-distance versions of the same train could be considered. The future of the IC4s now appears very uncertain as there will be no suitable services left for them to operate following the completion of electrification in 2025.