DB Long Distance issued a public apology on December 13 for the poor service and major delays suffered by passengers using the new Berlin - Munich high-speed route following the opening of the last section of the high-speed line between Erfurt in Thuringia and Ebensfeld, north of Bamberg in Bavaria, on December 10. 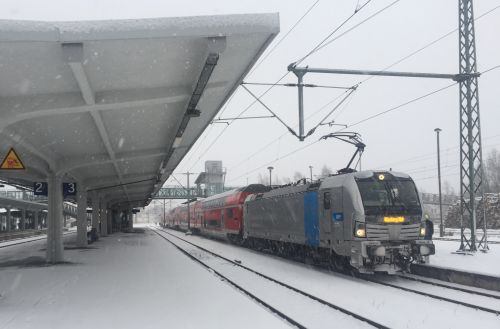 Mrs Birgit Bohle, chief executive officer of DB Long Distance apologised to passengers, saying that “without question DB had been unable to provide an acceptable level of service.” Bohle announced that full refunds and extra compensation would be available to anyone delayed by more than an hour.

Bolhler said that DB’s analysis showed the combination of bad weather and teething problems with ETCS had caused the majority of the problems.

Services on the new line started on December 10 with a completely redesigned timetable. Munich - Berlin ICE services use the new line via Erfurt, connecting there with services from Frankfurt to Leipzig and Dresden. The start of the new service coincided with the first significant snowfall of the winter which itself caused major disruption despite being forecast in advance.

Heavy snowfall across much of central Germany and covering all of the new line led to operational problems for infrastructure manager DB Network, with points freezing or being blocked by ice at major stations. Ice formation on trains also led to a substantial number being taken out of service.

DB Long Distance say that a series of individual problems with the ETCS signalling system supplied by Alstom led to major disruption on the new line. They have stated the problem is not systemic but rather multiple individual issues, which Alstom is investigating.

The opening of the Erfurt - Ebensfeld line has also led to the use of ETCS equipped older ICE1 sets operating with ETCS in Germany for the first time. This contributed to the multiple failures during the first week with ICE1s diverted via the longer route through Fulda. In some cases, trains have been stopped on the new line for extended periods whilst ETCS-related problems are resolved, leading to delays and the cancellation of subsequent trains.

The Erfurt - Leipzig/Halle high-speed line, which opened in 2015, is also equipped with ETCS , supplied by a consortium of Siemens and Kapsch, although until December 10 only ICE-T (class 411/415) EMUs had used this route. This line has operated using ETCS since December 2015 without any major problems caused by the signalling system.

The opening of the new Ebensfeld - Erfurt line also enabled the introduction of a new Regional Express service between Nuremberg and Sonneberg, Thuringia, which uses the southern section of the new line and the new connecting line to Coburg. This service uses ETCS-equipped Siemens Vectron locomotives which operator DB Regio leases from Railpool.

Despite the bad weather and the use of ETCS, this service operated successfully on the opening day and the following days.

DB Long Distance says that it expects services on the Berlin to Munich route to have “stabilised” by the coming weekend.