Debris struck by a train that caused fatal accident at Carmont was a result of changes to a drainage system made by Carillion which were not audited. 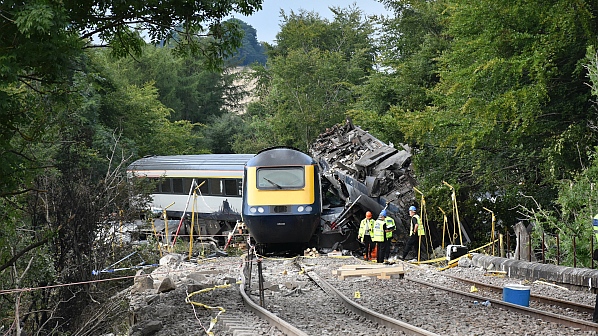 BRITAIN’s Rail Accident Investigation Branch (RAIB) has found that a drainage system and associated earthworks which failed at Carmont, Aberdeenshire, causing a fatal accident, had not been constructed in accordance with the original design by Arup and so were not able to safely accommodate water flows following excessive rainfall on August 12 2020.

RAIB has made 20 recommendations in its report into the derailment, which occurred at around 09:37 on August 12 2020. Three people were killed in the accident: the conductor, Mr Donald Dinnie, the driver, Mr Brett McCullough, and a passenger, Mr Christopher Stuchbury. The other six people on the train suffered injuries. Stuchbury was the first passenger killed on Britain’s railways since February 23 2007.

The 06:38 Aberdeen - Glasgow Queen Street service was formed of two ScotRail High Speed Train (HST) class 43 power cars and four Mark 3 coaches, and was returning north towards Aberdeen due to a blockage reported on the line ahead. The HST was travelling at 117km/h, just under the normal line speed, when it struck debris that had been washed out of a drainage trench. The train derailed and struck a bridge parapet causing the coaches and power cars to scatter.

The local area experienced severe weather that morning, with close to the average rainfall for August falling in a three-hour period.

The trench had been constructed between 2011 and 2012 by Carillion and contained a perforated pipe that had been installed as part of a project to address a known problem with drainage and the stability of the cutting in that area.

RAIB investigations found that infrastructure manager Network Rail’s (NR) audit regime at the time of the drain’s construction did not include audits likely to detect design modifications implemented on site without proper change control. RAIB said NR’s project team was probably unaware that the drain was significantly different from that intended by Arup and therefore did not act.

RAIB also found that preparation and retention of “as-built” drawings of newly constructed assets are required to assist future maintenance. RAIB said it found no evidence of any such drawings being submitted to Arup or NR.

Investigators found that a low earth bank (bund) had been constructed that ran across a slope leading towards the track. The presence of this bund significantly altered the flow of water so much that extreme rainfall would cause a concentrated flow into the steeply sloping section of trench. RAIB says evidence indicates that the intensity and duration of this rainfall would have generated water flows into the trench that were sufficient to wash away the gravel fill and the ground immediately surrounding the trench.

RAIB also found that no instruction was given by route control or the signaller that the train should operate at a reduced speed on its journey between Carmont and Stonehaven. There was no written process at that time which required such precaution in these circumstances. RAIB says its investigation found that the route controllers had not been given the information, procedures or training they needed to effectively manage complex situations such as that which occurred that morning.

RAIB’s investigation also found that NR management processes had not identified or addressed weaknesses in the way it mitigated the consequences of extreme rainfall events. RAIB says that despite an awareness of the risk, NR had not implemented additional control measures following previous events involving extreme weather and the management of operating incidents.

RAIB also said that a train built to modern standards would have had a number of design features that are intended to minimise damage to the train in case of collision or derailment. The HST involved in the accident was designed and built in the 1970s before some of these standards came into force. RAIB said that while it is not possible to be certain about what would have happened in the hypothetical situation that different rolling stock was used in the same accident, RAIB considers it more likely than not that the outcome would have been better if the train had been compliant with modern crashworthiness standards.

Mr Simon French, RAIB chief inspector of rail accidents, says the accident is a reminder of how disruptive and potentially dangerous Britain’s volatile weather can be, and that the rail industry needs to get even smarter about how it counters that threat. He said there was also an urgent need for the railway to provide real-time decision-makers with the information, procedures and training needed to manage complex and widespread weather-related events across the network.

Mr Andrew Haines, NR chief executive, says that in the 18 months since the accident NR has inspected similar locations and drainage systems across the length and breadth of the country and that insight from the RAIB report will help in future efforts. Haines also highlighted that NR had commissioned two independent taskforces to help NR better understand extreme rainfall events and how to better manage cuttings, embankments and associated drainage systems.

“We have invested tens of millions of pounds towards improving the general resilience of our railway and how we predict and respond to such events,” Haines says. “But this remains a multi-generational challenge and there is still much to do.”

The British regular the Office of Rail and Road (ORR) says its own joint investigation with Police Scotland and the British Transport Police was making good progress and it is anticipated that the report would be handed over to the Crown Office and Procurator Fiscal service in the coming months.