REOPENING of Dublin's Phoenix Park tunnel for passenger services and the construction of a cross-city light rail line have been included in the Irish National Transport Authority's Integrated Implementation Plan for greater Dublin, which was launched on April 3. 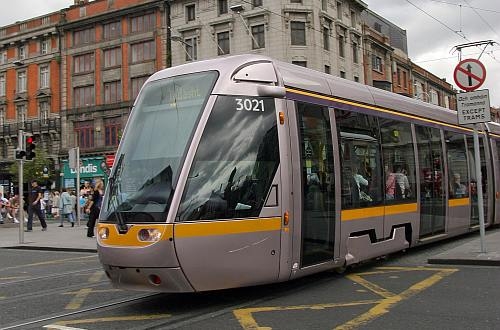 The plan, which was launched by minister for transport, tourism and sport Mr Leo Varadkar and Mr Alan Kelly, minister for public and commuter transport, provides a framework for investment of €884m in the region over the next four years, including €285.5m for light rail and €136.8m for heavy rail projects.

Preliminary construction is already underway on the 5.6km Luas Cross City Line, which will run north from the existing Green Line terminus at St Stephen's Green, crossing the Red Line at the junction of O'Connell Street Upper and Abbey Street and serving the new Dublin Institute of Technology campus at Grangegorman before terminating at an interchange with Irish Rail's Broombridge station. Commercial services will begin running on the 13-station line at the end of 2017.

The NTA says investment is also required in the Luas LRV fleet to increase capacity, with lengthening of existing vehicles and the acquisition of new vehicles included in the plan. According to the report, there are already peak capacity issues on the city centre sections of both the Red and Green lines, which will need to be addressed by 2018.

The reopening of the freight-only Phoenix Park tunnel to passenger traffic will enable services from the Kildare line which currently terminate at Heuston station to be extended to Connolly, which is closer to the commercial core of the city and the highest-density employment areas.

The plan includes the completion of the city centre resignalling project, which will increase capacity through Connolly and therefore supports the reopening of the Phoenix Park line by providing up to eight additional train paths per hour, enabling through running from the Kildare line to Grand Canal Dock. The completion of this project will allow commuter services to begin using the Phoenix Park tunnel link in late 2015 or early 2016.

In addition, the NTA proposes the elimination of seven level crossings, which are a major cause of delays on the Maynooth line. Ticket barriers will also be installed at all remaining stations in the Dublin region.

The plan proposes continued development of proposals for the extension of Dart commuter services north of Malahide and west to Maynooth, as well as protecting or progressing the Dart Underground Link. This project was cancelled by the Irish government in 2011 but could be revived under the next national capital plan.