Dutch trains to be wind-powered from 2018

ALL traction power for the Dutch railway network will come from wind turbines under a new energy contract signed on May 15 between power company Eneco and Vivens, an energy procurement joint venture which includes Netherlands Railways (NS), Veolia, Arriva, Connexxion and railfreight operators. 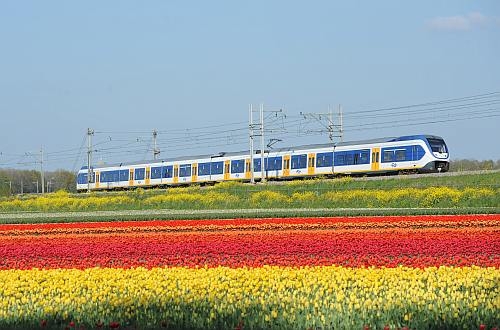 Under the contract, which runs from 2015 to 2025, wind will provide 100% of traction power on the ProRail 1.5kV dc electrified network from 2018 onwards, compared with around 50% today. The contract forbids the sourcing of electricity from the existing energy market, meaning only new-build wind farms can be used to meet the 100% target. It is estimated that after 2018 about half of the electricity demand will need to be covered to be covered by foreign, wind farms.

The total consumption of electricity on the Dutch rail network is about 1.4 terawatt hours (TWh) per year, and NS reportedly consumes 1.2TWh of this.

Operators are trying to reduce their traction energy consumption through the procurement of new trains and the adoption of more efficient driving techniques. NS claims that since 2005 the consumption of electricity per passenger kilometre has been reduced by about 30%.