THE Edinburgh - Glasgow Improvement Programme (Egip) reached a milestone in the early hours of October 18 with the first electric test run on the Edinburgh - Falkirk High - Glasgow Queen Street line. 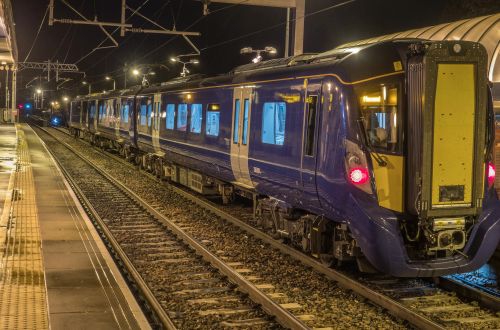 A Hitachi class 385 EMU ran under its own power on the western section of the line between Edinburgh and Linlithgow, which is electrified at 25kV 50Hz ac.

Train operator ScotRail says full testing of electric trains will begin on the remainder of the route when final safety checks have been completed.

“Yesterday’s trial was a hugely important step towards completing the electrification of the line between Edinburgh and Glasgow,” says ScotRail Alliance programmes and transformation director Mr Ian McConnell. “Having a train run on the route is one of the final phases of the electrification process. That it has gone so well tells us that we are almost ready to begin the next stage – which is to start fully testing the new trains themselves.”

Hitachi Rail Europe is supplying 46 three-car and 24 four-car class 385 sets for services in central Scotland under a £370m contract awarded by ScotRail’s parent company Abellio in March 2015. Most of the trains will be assembled at Hitachi’s Newton Aycliffe plant in northeast England, where the first locally-built train was officially unveiled last week.